Today I’m feeling like a Talky McTalkerson and am dying to wax nostalgic about all of the things that make a vodka sauce so good, but I don’t have time (and you may not have the patience). So, I’m going to distill it down to just this:

It’s that simple! Any alcohol will do, preferably one that is as flavorless as possible (enter: vodka) so that as the tomatoes cook down, no trace of alcohol flavor remains. More often than not, I use a dry white wine. 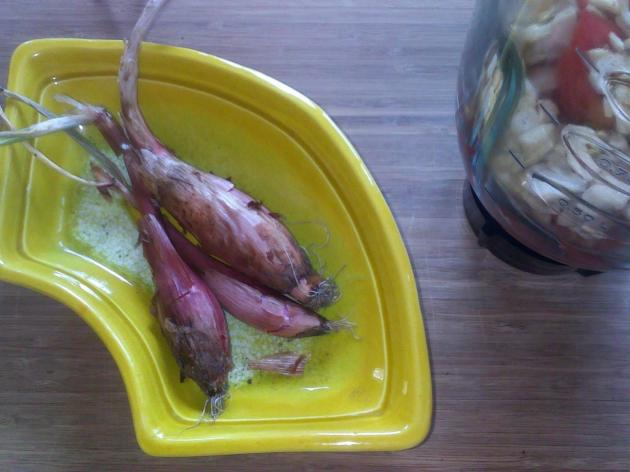 Have you ever grown the red Italian bunching onion called red torpedo? If not, grab a couple of seed packets, fill a pot with vegan compost-rich soil, and get on it! In my climate, I’m able to grow red torpedos year-round, and they proliferate equally well in pots and in the ground. They tolerate summer heat as long as they’re in partial shade, and they love a slight chill in the air. I have no idea where to buy them, but they grow so easily I’ve never bothered to look. Red torpedos can be used any time a recipe calls for red onion, and they can be paired with a bit of mild garlic to replace shallots. They are mild and sweet and taste great raw. They roast and caramelize well. Also, they’re pretty. In short, the perfect onion.

Ready for the skillet (vodka sauce) or the blender (raw sauce).

If you have really amazing just-picked tomatoes with a flavor that knocks your socks off, then this recipe can easily be adapted into a (not vodka) raw tomato cream sauce. I make it both ways, mostly depending on how much time I have. If you’re good about mise en place, you can start either version of this sauce while you wait for your water to boil, and be done in time to dress your pasta. 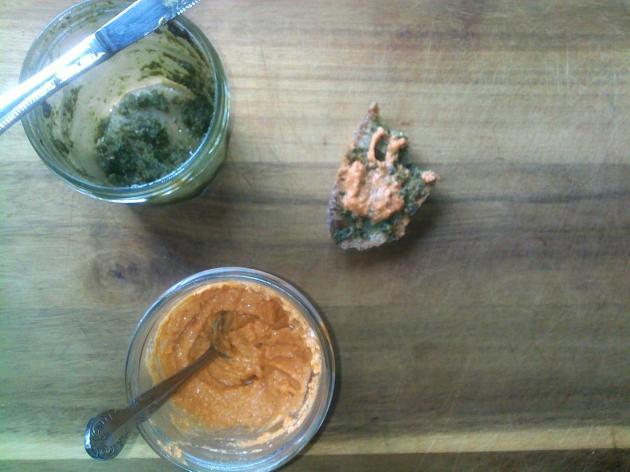 If you don’t have any red torpedo onions, 1/4 a small red globe onion will do nicely.

Heat the olive oil in a skillet or heavy pot over medium heat. Add the sliced onions and cook, stirring occasionally, until they begin to caramelize – about 5 minutes. Add the tomatoes and wine and bring the pot to a simmer, stirring and smashing the tomatoes around in the pot as they cook down. Simmer for 10 minutes, then remove from heat. Add everything to a blender or food processor – if you’re including the sweet pepper, add it now. Puree until smooth, adding water if necessary. Season to taste with salt and pepper.

To make this recipe raw: omit the olive oil, and blend everything straightaway.

Pulling up plants today yielded the teensiest acorn squash and noire de carmes melon, a decent butternut squash, okra and peppers. Soooo many tomatoes and strawberries and watermelon making a last ditch effort as the season winds down, I didn’t have it in me to pull them up yet. #GrowYourOwn
Still working our way through last summer’s canning spree. Instead of preserving this year’s garden, I’ve been making a lot of tarts and smoothies and salads . . . #GrowYourOwn #PandemicGardening #TheresMoreInTheFridgeAndFreezer
Strawberry cobbler, adapted from @nytcooking recipe “Chez Panisse’s blueberry cobbler.”
I’m always always dubious about making a 9x13 pan of brownies; until that first bite, and then I wonder why I don’t make these more often. ✨These are from Vegan for Everybody. I increase the espresso to 2 teaspoons and replace the 1/2 cup oil with 8 tablespoons Miyoko’s butter. #AmericasTestKitchenVegan #VeganForEverybody
A lovely day to work in the garden. #HappyPlace #GrowYourOwn
The one-bowl banana bread recipe from @ohladycakes doesn’t disappoint. It’s even better with a splash of dark rum, and subbing muscovado for 1/3 of the cane sugar.